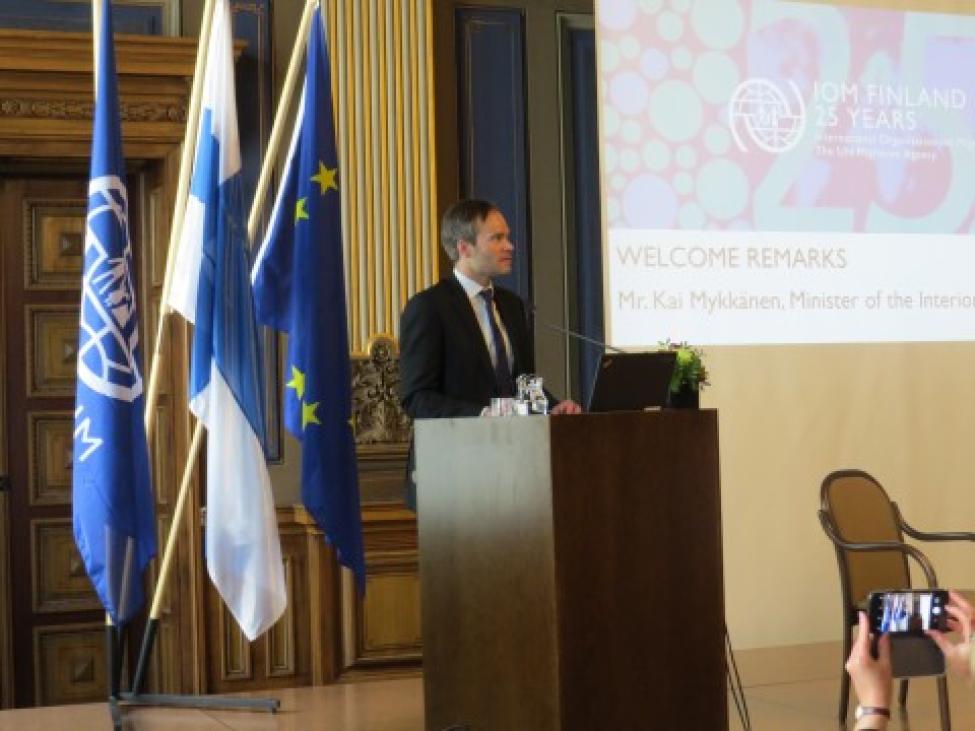 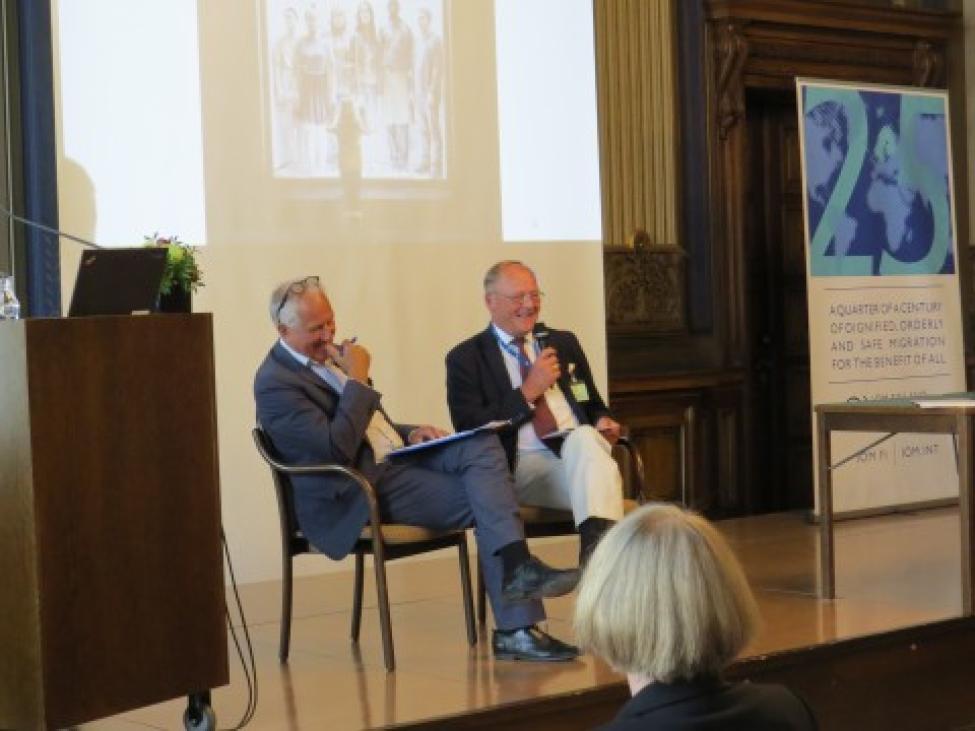 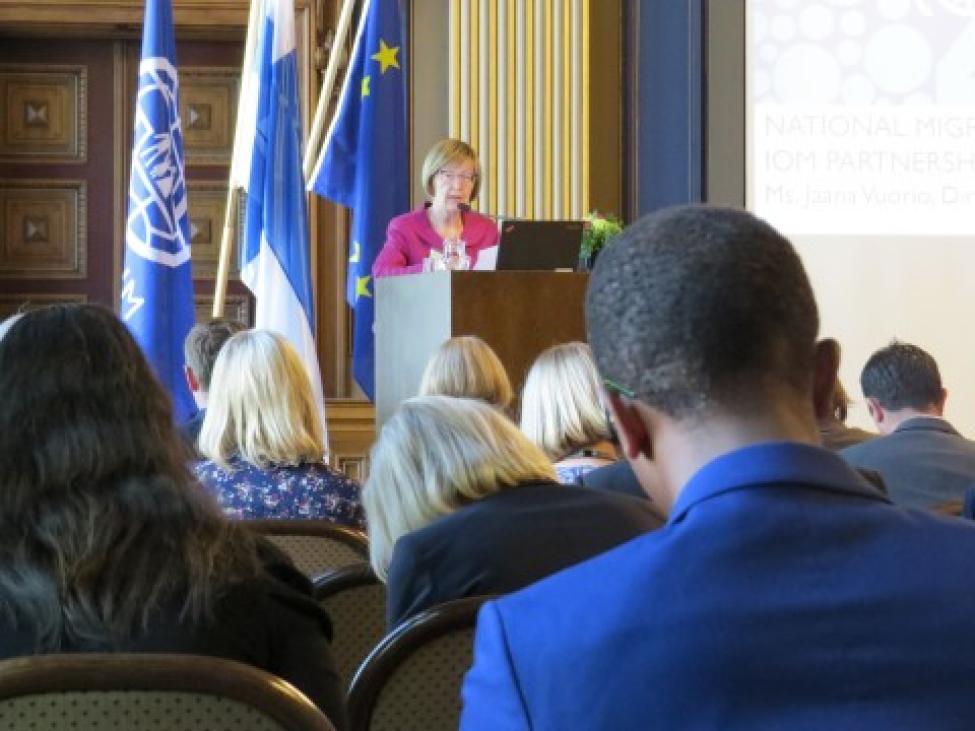 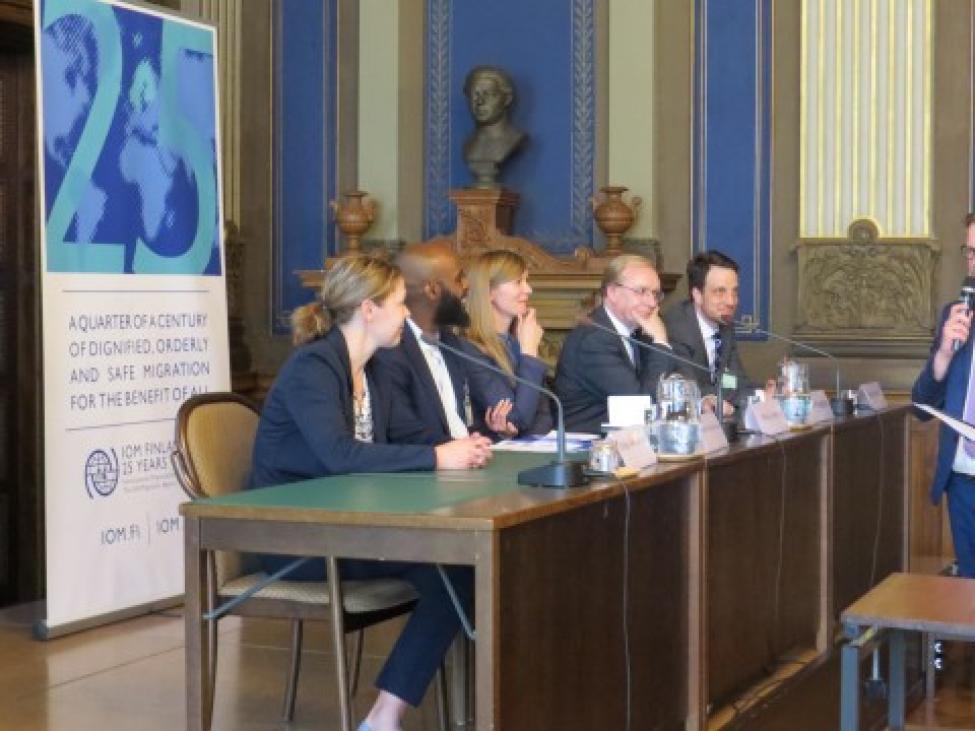 Helsinki – IOM Finland celebrated the 25th anniversary of the founding of the office in Helsinki with a high-level seminar for invited guests. The seminar was held in cooperation with the Ministry of the Interior and the Ministry of Foreign Affairs, at the House of the Estates in Helsinki.

IOM Finland’s Chief of Mission, Mr. Simo Kohonen, opened the seminar. He made the point that Finland and other states should shift to a more holistic/comprehensive view on migration governance, one that involves migrants in the decision making and planning processes, one that involves all government entities into the process, and one that encourages and promotes narratives that see migrants as equal and fully empowered members of the society instead of the ‘us vs. them’ thinking, that often prevails in the public discussions.

He also underlined that we need to work together to change the anti-migration narrative that unfortunately prevails also here in Finland. This not only affects the country brand and the interest of the much-needed talents and workers to move to Finland.

Mr. Kai Mykkänen, Finland’s Minister of the Interior, also made the point that Finland need to be more international and that it important that the country has a flexible system for attracting international experts.

He also stressed the need to respect the human rights of all migrants, be they labour migrants or refugees. But at the same time, he said, as open borders are not a possibility there need to be an effective system for people who need to return home.

He thanked IOM for the cooperation with the government during the past 25 years and hoped for innovative ideas and cooperation during the 25 next ones.

Present at the seminar were also two veteran IOM staff, who both were involved in the founding of the office in Helsinki. Mr. Anders Wenström was the Director of the Bureau for Europa end North America at that time and Mr. Hans-Petter Böe was his deputy and in 2009 became Regional Representative in Helsinki.

They opened up their treasure chest of memories to give the audience a glimpse of the world in the year just after the Cold War had ended, and the Soviet Union had collapsed.

Ms. Elisa Tsakiri, Deputy Chief of Staff at IOM headquarters in Geneva, reflected on the migration landscape in Europe in the past years after the big upheaval of 2015. In her keynote speech she pointed to some matters of importance, like creating legal channels for migration into the European Union and addressing anti-immigrant sentiment. She also mentioned the work going on to forge the Global Compact on Migration, a negotiated agreement on migration.

Ms. Jaana Vuorio, the Director General of the Finnish Immigration Service (Migri), touched upon the subject of how digitalization is changing the way of migration management. She also looked back upon the decades of cooperation between Migri and IOM Finland, a cooperation that actually started even before the office was opened within the scope of quota refugee resettlement.

After an invigorating coffee break Mr. Peter Mörkeberg, Designated Migration officer at the Embassy of Canada in Sweden, astounded the audience by giving the number of migrants moving to Canada this year only: 310,000. And that is excluding students and short-term labour migrants for instance.

Mörkeberg talked about the importance of involving civil society, and mentioned a Canadian speciality: privately sponsored refugees, who receive financial, emotional and resettlement support by private individuals who have grouped together for this purpose.

Ms. Paula Laine, from the Finnish Innovation Fund Sitra, gave the audience a fascinating overview of the current megatrends that are shaping our world. She mentioned three megatrends that especially concern developed nations like Finland: The riddle of work and income in the future, the representative democracy losing steam and the economy being at a crossroads.

The panel discussion, led by the seminar’s moderator Mr. Raine Tiessalo, had the theme: Opportunities from Migration – visions for the future. The participants were Mr. Mörkeberg, Ms. Laine, Ms. Sonja Hämäläinen, Migration Director at the Ministry of Economic Affairs and Employment, Mr. Mohamed Deerow Malin, from the City of Helsinki’s Youth Speaker’s Forum and IOM Finland’s Mr. Tobias van Treeck, Programme Officer for the Voluntary Return and Reintegration.

The panel discussed a varying range of subjects relating to migration and integration. At the end the moderator asked each one to name one thing that would help integration.

Peter Mörkeberg thought about the negative views on migration that are common in Europe and saw that much of that is due to a feeling of lack of control: "In Canada we have a carefully managed migration system. The Canadians feel that the government is in control of the migration to Canada."

Mohammed Deerow Malin said that the authorities still don't recognize the skill levels of migrants: "We would need more cooperation with the contries of origin, but also to motivate and encourage the migrants themselves to put our their expertise."

For Sonja Hämäläinen the inclusion of migrants is desicive factor in how inclusive a society really is: "We need to take migrants into the planning of programs and partnerships.

Tobias van Treeck said that as a representative for IOM he hopes that the international cooperation on migration finally will take a step forward. "Personally I think that it is so important for people to meet. You can have your prejudices broken down by meeting people in real life, even those that you are criticising online. It makes all the difference."